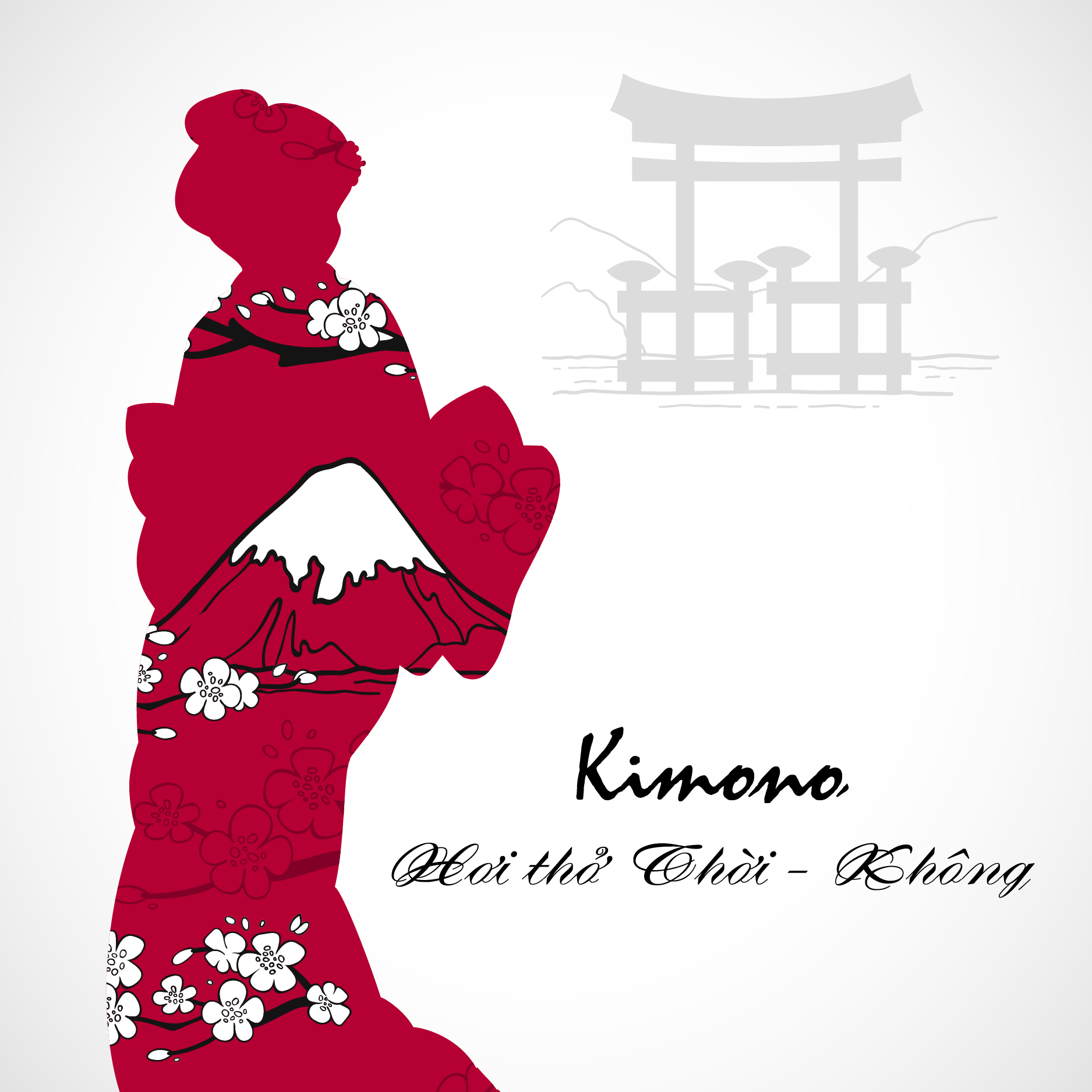 Japanese traditional clothing represents thousands of years of a long traditional cultural history, such as color palettes developed during the Heian period, shapes inspired by clothing and cultural traditions from the Tang dynasties. The lines, and motifs were influenced by traditional culture, nature, and literature of Japan; and along with that, the style and form of wearing was completely perfected in the late Edo period.

The best-known form of traditional Japanese clothing is the Kimono, which literally translates to “thing to wear”.

It can be said that Kimono is like a breath of time and space, connecting historical and modern beauty, helping Japanese culture and soul reach out to the world; that is a timeless-spaceless beauty.

Kimono was formed and developed throughout the history of Japan; Kimono is said to have started from the costumes worn by indigenous people in the Yayoi period (From 300 BC to 250), then was strongly developed in the Nara – Heian periods and perfected in the Edo – Meiji periods.

The social distinction of costume was noticed in the Nara period (710-794), through the division of high and low class. Women of higher social status will wear clothing that covers most of their body, so dresses also need to be developed to accommodate the divergence. For example, full-length gowns were used, to cover most of the body, from collarbones to feet; Sleeves must be long enough to cover fingertips.

The first version of the Kimono appeared in the Heian period (794-1192). The straight cuts of the fabric were sewn together to create an outfit that fits every body shape.

By the Edo period (1603-1868), Kimono had evolved into a men’s outerwear called the Kosode. Literally meaning “small sleeves”, with the characteristic that the cuffs were all smaller than the previous version.

During the Edo era, Kosode was a clear cultural landmark of Japanese. Everyone in Japan wears it, regardless of age, gender, or socioeconomic position. When a Japanese person interacting with a foreigner, the obvious difference is that the foreigner will be the one who did not not wear Kosode. Therefore, the Kosode of the Edo period became a cultural symbol and the first feature to identify Japanese people in the world.

During the Meiji period, the government changed the name of the Kosode costume to Kimono, which means “thing to wear”. The Meiji period also specifically encouraged women to wear Kimono and men to wear Western clothes in order to capitalize society but still retain the soul of the nation. 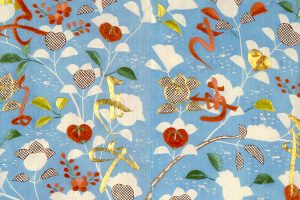 Japanese women will wear Kimono when participating in traditional arts, such as the tea ceremony or flower arrangement (Ikebana). Girls and single women will wear Furisode, a garish Kimono style with long sleeves and tied with a bright Obi (belt) at the back and it is called as Furisode. 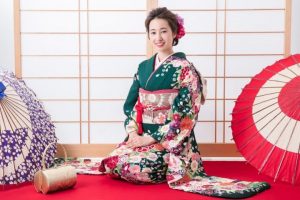 The Tomesode is a Kimono with patterns located only on the lower part of the cloth and the Mon (crests) on the sleeves and shoulders, worn by married women on formal occasions. The more the number of Mon (one, three or five) inserted, the more important occasions in which the Kimono worn. The black Tomesode is called as Kuro Tomesode and the others are called Iro-Tomesode (sometimes also called Irosode), however, with Tomesode, Kuro will be the most used, due to its solemnity and majesty that brought by black colour. 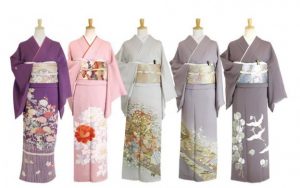 Houmongi can be worn by married and single women at parties or weddings of relatives or friends. Houmongi has shorter sleeves than Furisode, besides, the motifs are arranged along the seams, making it more “flashy” and less formal than the Tomesode. 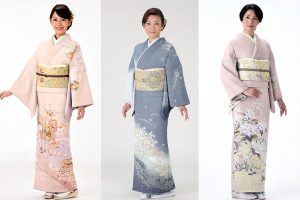 Komon is japanese traditional costume which have an all-over repeat pattern; Komo is considered as a daily Kimono, can be worn every day. Nowadays, few people in Japan wear Komo, because no one would buy a simple and daily Kimono like Komon anymore, instead, they will choose more colorful, sophisticated Kimono for traditional and artistic activities. 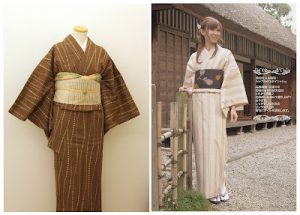 Iro-muji is a semi-formal Japanese traditional Kimono. Iro-muji has no design or pattern, except for the basic pattern of brocade. “Muji” means “blank” and “Iro” means “color”. However, a black and blank Kimono is not considered as “Iro-muji”. Iro-miju is often worn by women in parties or in visiting friends and relatives such as tea ceremonies, meetings, dining out, etc. Be similar with Komon, Iro-muji is no longer as widely used as other types of Kimono in modern society.

Susohiki is a garment commonly worn by Geisha or traditional dance performers. The dress is quite long when compared to the usual Kimono, as the shirt must cover the floor. Where a normal kimono for women is usually 1.5–1.6 m long, a Susohiki can be up to 2m long. This is also the reason Geisha and Maiko have to lift their skirts when going out and this is also a way to show their luxurious beauty. 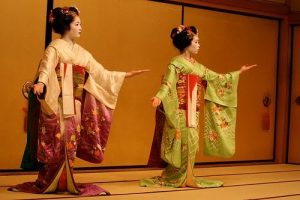 Kimonos are traditionally worn in layers, made of silk, wool, or synthetic fabrics, and are therefore often worn during cold months. With the sizzling summer months, the Japanese will prefer light Yukata, made of cotton fabric. Yukata are worn for by both men and women for special or casual occasions and are often used after bathing at Onsen (hot spring resorts) and Ryokan (traditional inns). Usually, Yukata will come with Geta clogs, creating comfort, lightness, elegance for the wearer. Today, accessible, brightly colored Yukatas are very popular at summer festivals, fireworks, or at Japanese-style restaurants; and Yukatas are simple and comfortable which made it easy to wear for all men, women and even children.

Kimono and Yukata in Chiyoda Sushi

When entering Chiyoda Sushi, diners will be greeted by the spirit of Omotenashi from the chefs, waiters, cashiers and especially from the receptionists dressed in traditional – Yukata.

At the restaurant, besides enjoying quintessential Japanese cuisine, diners will also have the opportunity to admire a collection of traditional costumes, such as Kimono, Yukata, Geta clogs… bringing a standard Japanese space, from the taste of foods to the spirit and beauty of Japanese culture, to all diners at Chiyoda Sushi. 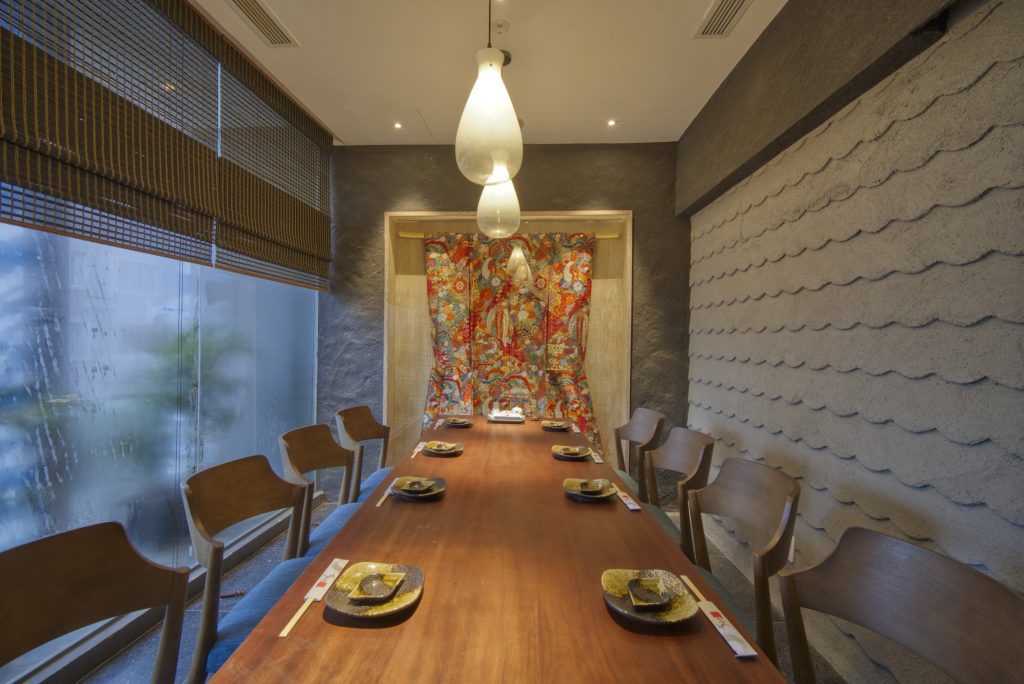