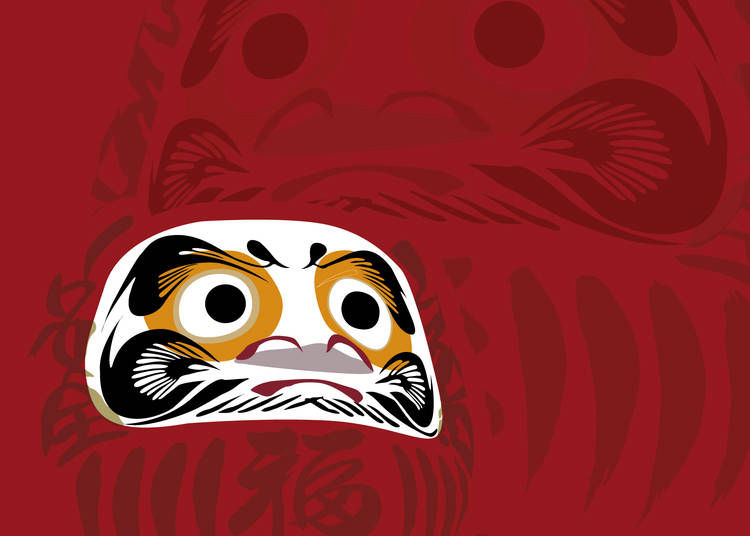 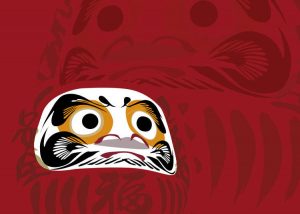 Daruma doll is a Japanese traditional doll modeled after Bodhidharma, the founder of the Zen tradition of Buddhism.

These dolls are typically in red, round shape, empty inside and described as a bearded man (Bodhidharma); however, there are vary greatly in color and design depending on wishes, region or artist.

To foreigners, Daruma may only be seen as a toy or gift, but to the Japanese, it is a spirit of culture. Daruma is seen as a symbol of endurance, happiness, luck… that is making them a popular encouragement gift for generations of Japanese people.

The Legend and History of Daruma 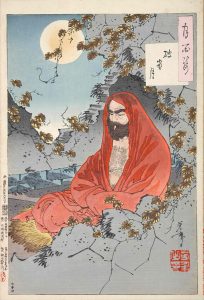 Bodhidharma was a Buddhist monk who lived during the 5th or 6th century AD. He is traditionally believed as the transmitter of Zen to East Asia.

There is a legend claimming that he sat facing a wall in meditation for a period of nine years without moving, which caused his legs and arms to fall off the body. Another popular legend is that after falling asleep during his nine-year meditation he became angry with himself and cut off his eyelids to avoid ever falling asleep again.

Therefore, the characteristic image of Daruma is that it is a limbless round block; and when sold in stores, the Darumas are designed without irises to depict the Bodhidharma falling asleep while meditating, so he has not been able to find enlightenment…

Daruma becomming as a good luck charm originated from Daruma-dera (Daruma Shrine) in Takasaki city (Gunma prefecture, north of Tokyo). In the past, the founder of Daruma-Dera temple would draw New Year charms depicting Bodhidharma for the people in area to wish for happiness, prosperity and avoid for accidents and bad luck.

There is an annual Daruma Doll Festival held by Shorinzan temple (another name of Daruma Dera) in the city of Takasaki to celebrate the birthplace of the Daruma doll. 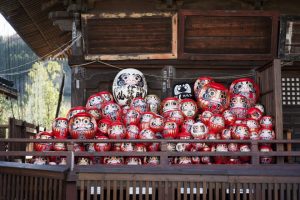 Features and symbolism of Daruma

Darumas are still usually made of papier-mâché, have a round shape, are hollow and weighted at the bottom so that they will always return to an upright position when tilted over. In appearance, they are quite similar to the roly-poly toy in Western cultures with the ability to balance themselves when tilted, therefore, Daruma is also known as Japanese roly-poly.

This self-balancing ability has a great symbolic meaning, Daruma shows the resilient and indomitable spirit of the Japanese people against the impulses of nature, disaster, or war; they are always able to stand up to get over any challenge and shine. That is why Daruma is often given as a gift to encourage the growth of young children.

The origins of Daruma’s traditional red coloring probably came from the color of Bodhidharma’s robes.

Besides, red according to Japanese and Asian culture represents luck, health, and happiness. Therefore, Daruma dolls are often created with red color to pray for good luck and peace to the owner.

Nowadays, Daruma can also be found in various colors such as yellow- wish for good luck in financial matters or white – wish for fortune in education and exams, etc.

Daruma’s facial hair is a symbolic representation of the animals well known in Asian culture to embody longevity: the crane and the tortoise.

The eyebrows are in the shape of a crane, while the cheek hair resembles the shell of the tortoise. In this way, Daruma was designed to match the Japanese proverb “The crane lives 1000 years, the tortoise 10,000 years” (Tsuru Sen-nen, Kame Man-nen). 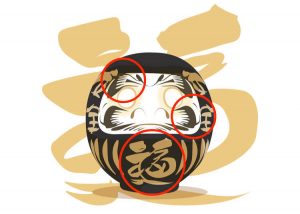 The Kanji letters meaning “luck”, “fortune”, “perseverance”, or similar others are sometimes written on the Daruma’s midsection, probably as a reflection of the reason for which the doll was acquired.

Additionally, sometimes, people write their wish, or goal, on the doll itself, to remind themselves, or to inform their wish to the god in a more official manner.

Darumas’ Eyes and the meaning of eye-drawing.

For Daruma, the eyes are the most characteristic and cultural highlight.

When being sold, Daruma’s eyes are a blank, lifeless. Its symmetrical round blank eyes is seen by the Japanese as a way for Daruma to keep track of the goals or tasks set by the owner to motivate them to accomplish the goal.

The owner will draw a Daruma one eye when setting a new goal; this one-eyed drawing ritual is known in Japanese as “Kaigen“. After completing the goal, the owner will point the remaining eye as thanks for Daruma’s support. By this way, when the owner sees one-eyed Daruma, they will remind themself about their goal and to strive hard to achieve it. This custom has also led to a Japanese phrase that translates as “Both eyes are open” (Ryoume ga aku). 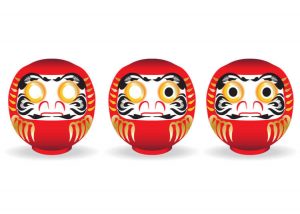 At Chiyoda Sushi Ben Thanh, there is a collection of Daruma dolls. This mini collection helps diners enjoy the cuisine and learn the Japanese traditional culture at the restaurant.

The Darumas at Chiyoda Sushi Ben Thanh mostly have one eye, showing Chiyoda Sushi’s strong will and determination in pursuing the goal of “To Popularize Sushi” in Vietnam, as well as the wish for peace and good luck to all diners.

Try once arriving in Chiyoda Sushi and contemplating the culture hidden in the Daruma, surely diners will find it very interesting. 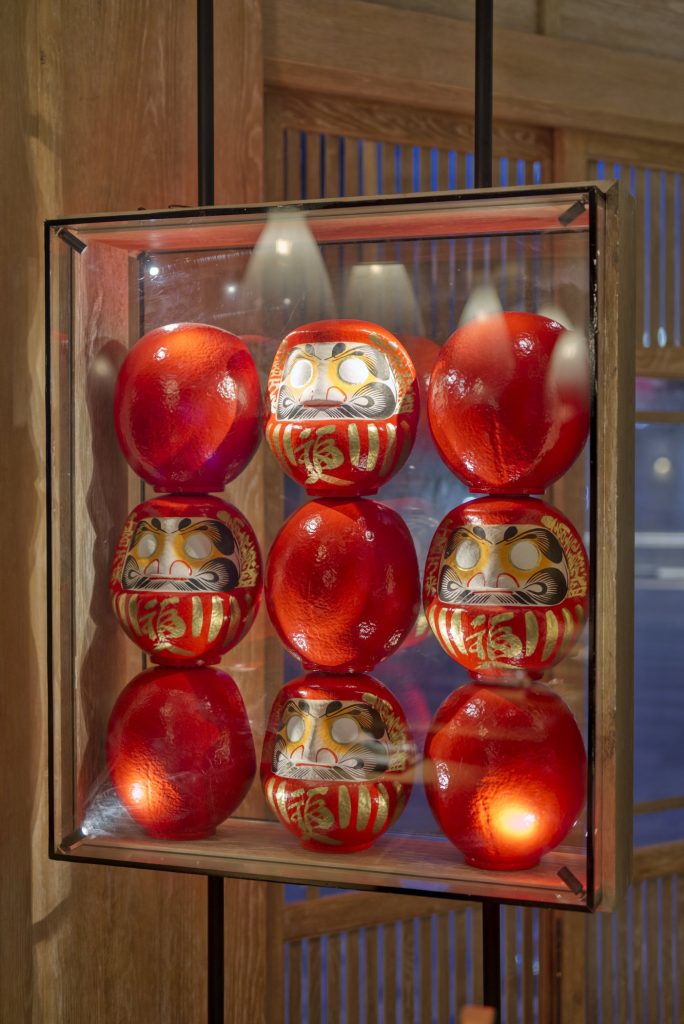