Kabuki - The Breath of Endless Time 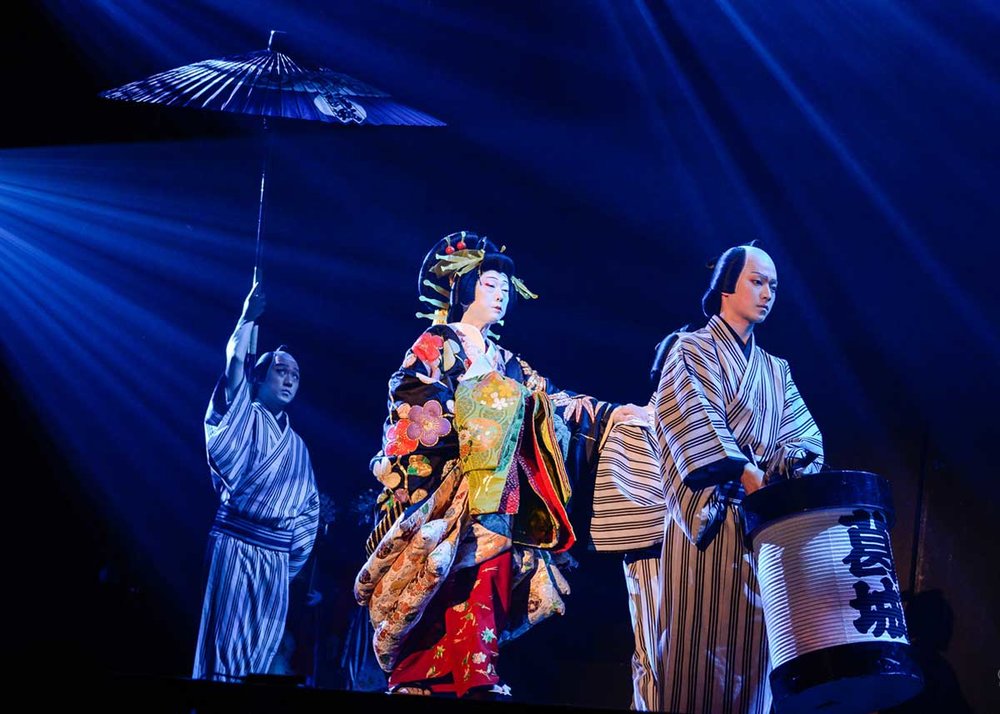 Kabuki is a popular Japanese traditional play with singing and dancing performed in a highly stylized manner. With a rich blend of music, dance, mime, spectacular staging and costuming it has been a major theatrical form in Japan for four centuries. In Japanese, the word is written with three Kanji characters: Ka means “song”; Bu – “dance”; and ki – “skill”.

Kabuki plays require great singing, dancing, and performances skills from Kabuki actors. These actors are responsible for receiving and transmitting the traditional values of Kabuki from generation to the next one with accuracy and only slight differences. Many Kabuki actors have watched their forefathers performing and have been taught acting skills over the years; therefore, the Kabuki actors have often added “generation numbers” after their names to indicate their position among the long list of famous Kabuki actors across the country.

The form of Kabuki first appeared in the 17th century, when a female dancer named Okuni became famous for her songs parodying Buddhist prayers. She gathered many wandering actresses into a dance and acting group.

Okuni’s Kabuki is the first entertainment designed for the tastes of ordinary people in Japan. However, because of the sensual nature of dances performed by women, the government of that time issued a law banning female Kabuki performances in 1629, and instead, young men would dress up as women to perform the shows. However, in 1652, Kabuki played by young men was also banned by the government because of ethical concerns. Eventually, older men were given the role to take on this art form, and from there, Kabuki became the all-and-only-male performative entertainment form that persists to present.

In the early 18th century, Kabuki had taken a definite place in Japanese cultural life, becoming an official serious and dramatic performance.

When merchants and commoners had their economic and social roles enhanced, Kabuki, as a folk art form, became a play for artists to perform and populace to express commentary on social life at that time. Actual historical events were staged and elaborately performed in public; for example, Chuushingura (1748) was a true re-enactment of the event of 1701 – 1703, in which a group of 47 Ronin (ownerless Samurai), after two years of waiting patiently, were able to take revenge on the person who killed their master.

Today, Kabuki is still popular and has become one of the unique cultural symbols when mentioning to Japan. In November 24th, 2005, Kabuki was proclaimed by UNESCO as an intangible heritage possessing outstanding universal value.

The structure of a Kabuki play is derived from the rules of many other traditional Japanese art forms. Basically, the Kabuki structure follows the jo-ha-kyū (序破急) rule, according to which a typical play starts slowly, speeds up, and ends quickly.

Nearly every full-length play occupies five acts. The first corresponds to jo, an auspicious and slow opening which introduces the audience to the characters and the plot. The next three acts correspond to ha, where events speed up, culminating almost always in a great moment of drama or tragedy in the third act, and possibly a battle in the second or fourth acts. The final act, corresponding to kyū, is almost always short, providing a quick and satisfying conclusion.

Key Elements of a Kabuki Performance

Music, created by both singers and instruments, helps set the narrative tone and pacing of a scene. Songs may be performed by one or many singers (Utakata) at a time and are usually accompanied by a Shamisen – a type of Japanese lute. Other instruments can be used to create sound effects or act as cues for the actors.

Depending on the performance, the musicians may be offstage totally, positioned in the back or off to the side of the stage, or even directly incorporated into the action of the play. Dance numbers are inserted into performances at almost any opportunity. However, kabuki acting is so stylized it’s indistinguishable from dance most of the time.

Actors are trained to move and gesticulate using dance-like motions, meaning dance is an integral part of all kabuki plays. The movements differ based on the character: Onnagata (female characters) flow daintily while Doki (comedic characters) bounce jauntily. Many performances end with a lively dance finale (Ogiri Shosagoto) featuring the whole cast.

Tachimawari: a stage combat technique. The choreographed fighting technique used by the Kabuki actor to be able to move and act according to the music to depict the character’s battle scenes. 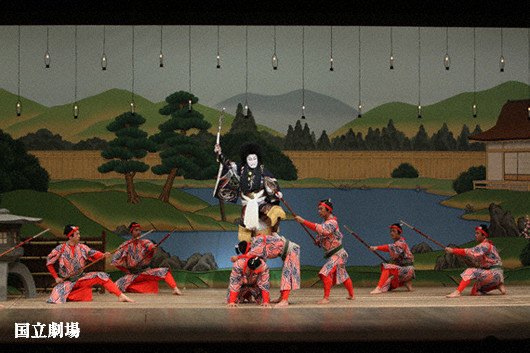 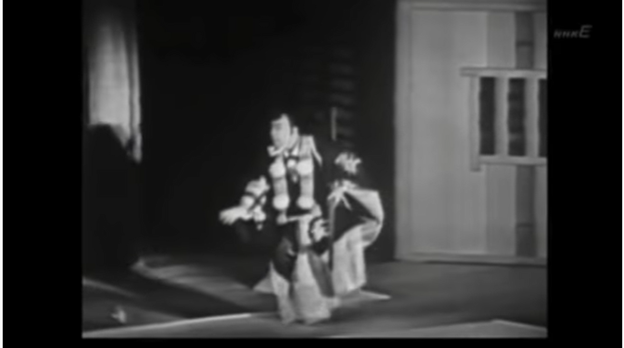 Ningyoburi: the act of one actor controlling another’s movements, as if a puppeteer. This technique was inspired by Bunraku, Japanese puppet theater. 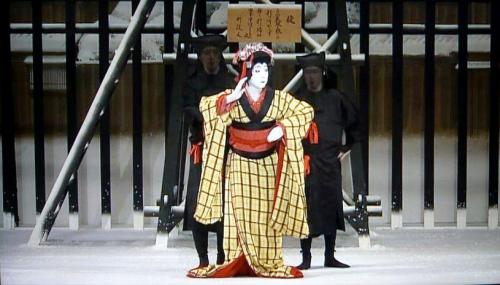 Since kabuki plays tend to be set in the past, performers usually wear Kimono – Japanese traditional clothing. Styles range from practical and subdued to cumbersome and extravagant. One of the most important skills of the actors is simply manipulating and moving in their heavy costumes.

The costumes and accompanying wigs are made by hand by skilled artisans and are sometimes ornately woven with fine silver and gold threads. 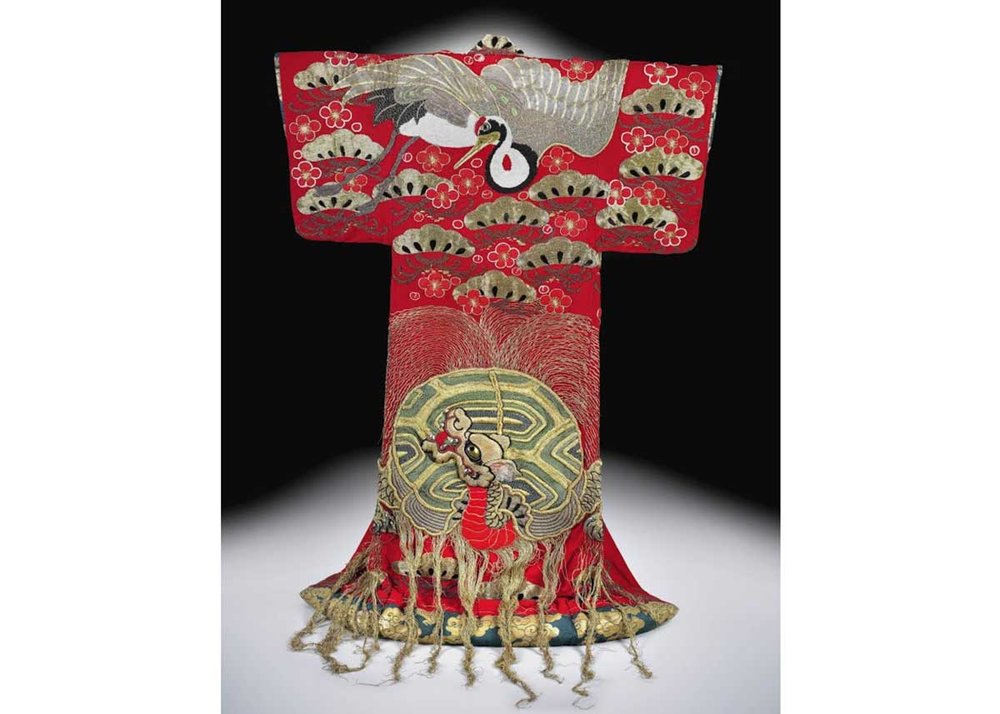 Known as Kesho, Kabuki makeup is based on a character’s traits. Actors’ faces are coated with Oshiroi (white paint) to make them both more visible and dramatic. Then, colored lines are added to enhance their features as well as describe their character; for example, red represents qualities like passion and anger; blue symbolizes evil or sadness. Supernatural beings like ghosts and demons wear the most dramatic makeup. Actors apply their own makeup so they can better understand their character. 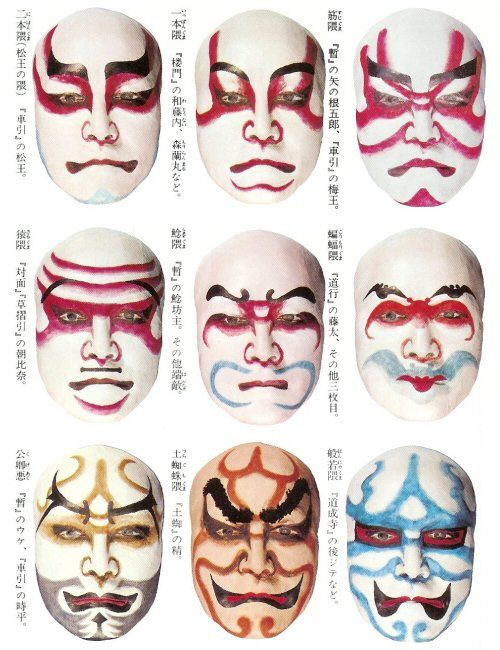 Stage decorations are lavish and typically include complex machinery. Moving lifts, traps, and curtains allow the performers and backgrounds to undergo astonishing transformations. For instance, an actor may suddenly disappear from the stage and reappear in the audience, or a background may move to simulate a ship moving across water. Ghosts and and demonic characters are often suspended in mid-air with steel wires, a process called Chunori.

When actors themselves need to transform, a very useful player is the Koken. Koken are stage assistants who help actors with costume changes and props. They often wear all black to maintain the illusion that the characters are transforming on their own.

In Saigon, when coming to Chiyoda Sushi, besides enjoying the food, dinners can also feel the breath of culture in every decoration at the restaurant.

The restaurant exterior is designed as a miniature museum. With the view from the two main streets Le Thanh Ton and Truong Dinh, diners can see the artistic value of Kabuki plays depicted from the windbreaks along the building.

Entering the restaurant, the hearted Sushi Bar is decorated with famous Kabuki characters and actors, imbued with Kabuki plays.

All these details, besides its’ decoration purposes, Chiyoda Sushi also hopes to bring the most Japanese experiences to customers when enjoying food at the restaurant. 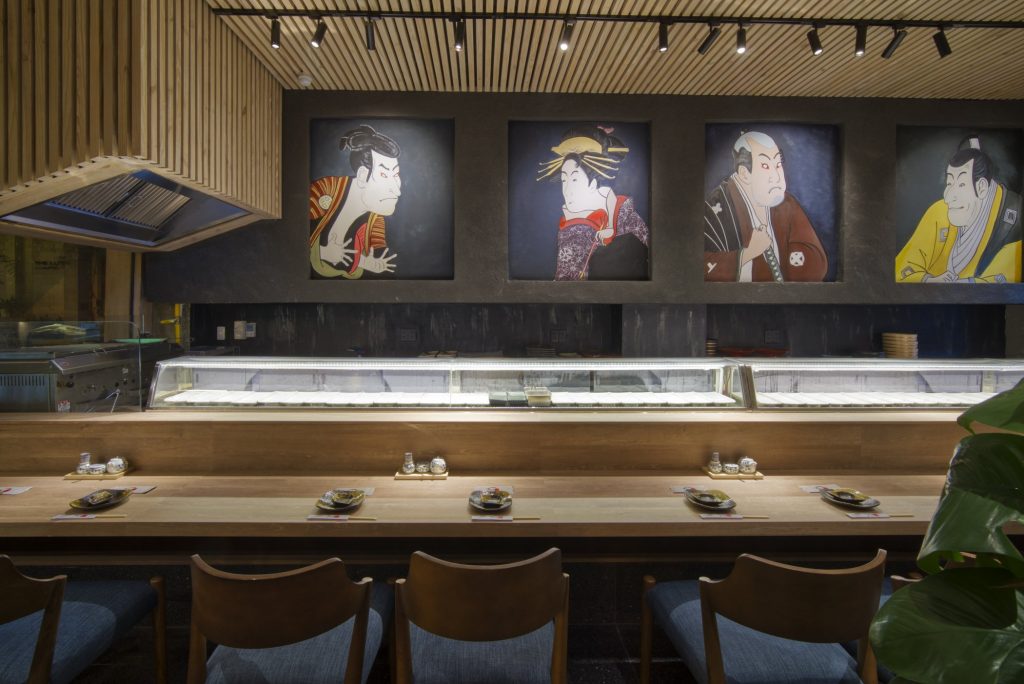 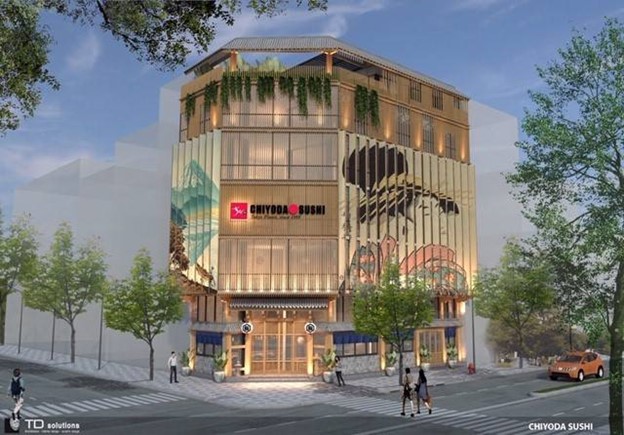